Official Comments Policy:
This is my blog and I reserve the right to delete any comments that don't abide by these rules and/or don't contribute to the overall intellectual atmosphere of the blog. I don't mind comments from people who disagree with me, as I am very much open to reconsidering or revising anything that I write.
1. No swearing or otherwise profane language.
2. No insults or otherwise abusive language, toward me or any other commenter.
3. No spamming or trolling.

It has been a few years since I last updated this blog. I've decided to put full-time pro-life work on hold because to be frank, it just doesn't pay the bills. I was trying to go the pro-life missionary route and raise my own salary, but I have extreme social anxiety which makes asking people for money, however worthy the cause, that much more difficult. So now I'm concentrating on what I do best: playing music. So I've joined two bands, a hard rock band playing original songs and an 80s cover band, as well as doing other work to supplement the income. 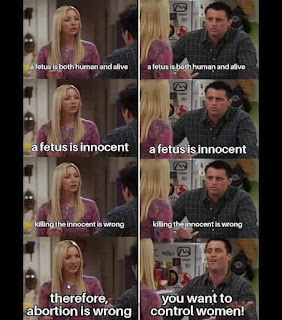 But I want to continue contributing to this blog. As you are likely aware, on Tuesday Politico reported a leak that the Supreme Court justices are planning to vote five to four to overturn the landmark cases Roe v. Wade and Planned Parenthood v. Casey, effectively returning the decision of whether to legalize abortion to the prerogative of the states (Justices Alito, Thomas, Gorsuch, Barrett, and Kavanaugh will vote for overturning, and Justices Roberts, Sotomayor, Kagan, and Breyer will vote against overturning). Chief Justice Roberts confirmed the draft is accurate but added it does not represent a decision by the court or the final position of any member of the court, as justices may end up changing their minds. This final decision is slated to happen in June. However, just today we discovered Washington Post obtained another leak that affirmed the five justices are standing firm on their position to overturn Roe and Casey. Chief Justice Roberts is launching an investigation into who leaked this information. There are some who believe it was leaked by a leftist source to attempt to pressure the conservative justices into changing their vote. Others believe it was leaked by a conservative source in case any justice changing his mind might seem politically motivated. In light of this new leak coming to light, the former seems more likely. But only time will tell, if they ever discover who it was at all.

The bombshell news that the Supreme Court is going to overturn the Roe v. Wade decision has led to the predictable frothing at the mouth of leftists, especially on social media. People have been fantasizing about murdering the conservative justices before this happens, leading the Supreme Court to erect fences around the building and beef up security. Unfortunately the conservative justices have also been doxed, leading to people discovering and posting the private addresses of these justices. And now people are protesting at the justices' homes in violation of federal law, not that any legal action will be brought against these protestors. Jen Psaki, the current White House press secretary, refused to condemn the doxing of the justices or the illegal protesting at these Justices' homes. It's also been rumored that Justice Alito and his family have been moved to an "undisclosed location" for their own safety. Leftists on Twitter have even been falsely accusing the conservative justices of lying under oath during their confirmation hearings (they didn't) and are calling for their impeachment. You'd think after two failed impeachment attempts against President Trump, the left would be more careful about calling for impeachment of conservatives.

As Timcast reports, the unreasonableness doesn't stop there. Elizabeth Warren and others have been calling for an "expansion" of the Supreme Court (to pack the Supreme Court with leftist activist judges who will always give the left what they want). Eric Swalwell claims this will lead to striking down interracial marriage (it won't). The Republican party is the party of Lincoln and slavery abolition. The Democrat party is the party of Jim Crow and the KKK. The idea that Republican Supreme Court judges, especially when a black conservative is on the court, want to enact racist policies is absurd. President Joe Biden has even said this will lead to segregating gay children in classrooms. (Again, it won't.) This is just the tip of the iceberg from what I've seen but this extreme fear mongering, even from our president and members of Congress, is deeply concerning.

This leak has even infected public life. I had a gig on Friday night with my band and one of the girls in attendance yelled at our singer to talk about women's rights from the stage. Thankfully our singer didn't take the bait because when we do music, we want to escape politics for a little while and enjoy music together as human beings. Even New York Times, which incidentally had "fetus" as their Wordle word for yesterday, dropped the word "fetus" from their list and changed the word of the day because they want to escape from the news with their game. Women on TikTok are lamenting overturning Roe will spell the end of "hookup culture" (as if conservatives are going to devastated by that news). Meanwhile conservatives are happy to see leftists are finally learning how human reproduction works.

I intend to read the decision in full. Guaranteed, 99% of the people complaining on social media have not actually done that. I know they haven't because I've engaged many of them in conversation and have read tweets and status messages from others and they're always clueless. They fail to understand and interact with the legal and philosophical arguments made in the decision, instead resorting to the same tired arguments and ridiculous comparisons they've always been making. I got so fed up with it that I decided to revive this blog so I could display many of these bad arguments and show why these diatribes are just nonsensical.

Posted by Clinton Wilcox at 7:00 AM No comments:

I'm going to try to write this and my next article without being too polemical. It will be difficult, but these two article are coming from a place of utter frustration. Frustration at the fact that so many people in our society can't think. This is evidenced by the number of videos by vloggers on YouTube that contain poor arguments (actually, that's too charitable; their arguments are downright pathetic), and further evidence by the number of people sharing these videos so that they go viral because the people sharing these videos can't think and don't realize how poor (read: pathetic) the arguments actually are. So I'm going to write two articles responding to two such videos. This first one will be responding to a video by vlogger jaimekid2 Ben Shapiro's arguments against abortion. Why am I responding to these videos if the thinkers are so unsophisticated? Because people are taking them seriously.

So what is jaimekid2's argument against abortion? He says, "Ben Shapiro is wrong on abortion. The reason why he is wrong is because he doesn't hold his values consistently."

Read the rest at the Life Training Institute blog.
Posted by Clinton Wilcox at 3:06 PM No comments:

Book Review: A Practical Guide to Culture by John Stonestreet and Brett Kunkle

Special thanks to Brett Kunkle for providing me with a free copy to review the book.

There aren't many books that I'm aware of that try to talk about the culture as a whole. There are certainly some good ones out there (such as Neil Postman's Amusing Ourselves to Death), but Stonestreet and Kunkle's book, A Practical Guide to Culture, takes it a step further in that they don't just talk about our culture and how we got here, but they actually provide practical steps on how Christians ought to live in this culture and how to raise Godly children in a culture that can't wait to corrupt them. Even if there were other books about culture, as culture has a tendency to shift rapidly, books like this one are constantly needed. After all, the concept that a person can marry someone of the same sex, as one of our Supreme Court justices rightly pointed out, is younger than the smartphone. "Trans rights" wasn't even a thing more than a few years ago.

Read the rest at the Life Training Institute blog.
Posted by Clinton Wilcox at 11:47 AM No comments:

So Joss Whedon Made a Planned Parenthood Propaganda Film...

There's no doubt Joss Whedon is a great director. I have the entire Firefly series on DVD and I'm a huge fan of the Avengers movies (and I have friends who sing the praises of his other shows, like Buffy the Vampire Slayer and Dollhouse). However, in a bizarre turnaround, Whedon has set his sights on promoting Planned Parenthood by filming a three-minute short film called Unlocked. The film, of course, is well-made, but it doesn't make any sense.

Read the rest at the Life Training Institute blog.
Posted by Clinton Wilcox at 4:43 PM No comments:

Life's Work: A Moral Argument for Choice by Dr. Willie Parker is a new book defending abortion rights by an African-American doctor who is a self-proclaimed "Christian" (the reason for the quotes around Christian will become evident below). For all the lip service Parker says about rationality and wanting to approach the issue rationally, I've rarely read a more irrational defense of abortion rights.

Read the rest at the Life Training Institute blog.
Posted by Clinton Wilcox at 11:27 AM No comments:

Zero Reasons a Fetus is Absolutely Not a Person

A friend posted an article on Addicting Info to my Facebook wall titled 14 Reasons a Fetus is Absolutely Not a Person, written by one Wendy Gittleson (who has obviously never seen the inside of a logic textbook and has no sense of shame). This article will be a bit polemical, mostly because of her undeserved arrogance and the fact that her article doesn't even come close to doing what her headline alleges she is going to do. Seriously. Just take one look through her 14 questions (they are not arguments), and you'll notice one glaring omission: none of these 14 questions offer any sort of argument for why the fetus is not a person. They are merely hypothetical questions one might pose to a proponent of fetal personhood (such as myself), and some of the questions are incredibly dumb. Only one question is actually legitimate. But none of these are arguments that support the proposition "a human fetus is not a person." Ordinarily I'd pay no mind to this article and I would consider it not worth my time to respond to. But it was posted to my Facebook wall and another friend encouraged me to respond because there might be people who are actually taken in by this garbage. And I'll be doing this completely sober. Pray for me.

Read the rest at the Life Training Institute blog.
Posted by Clinton Wilcox at 10:09 AM No comments:

A while ago I came across this letter from a dad whose unborn daughter, Eva, had a debilitating disability and would die a few days after birth. Of course, it's a very difficult situation to go through. No parent ever wants to outlive their son or daughter. However, the circumstances regarding their decision to bring the child to full term, while it appears noble on the surface, actually doesn't respect the inherent dignity of their child.

Read the rest at the Life Training Institute blog.
Posted by Clinton Wilcox at 4:13 PM No comments:

Looking for something specific?

Blogs You Should be Reading