Official Comments Policy:
This is my blog and I reserve the right to delete any comments that don't abide by these rules and/or don't contribute to the overall intellectual atmosphere of the blog. I don't mind comments from people who disagree with me, as I am very much open to reconsidering or revising anything that I write.
1. No swearing or otherwise profane language.
2. No insults or otherwise abusive language, toward me or any other commenter.
3. No spamming or trolling.

AHA Is At It Again

I've written two articles on Abolish Human Abortion (AHA), so I guess you could consider this take three.

I've decided to write this article because this kind of thing is exactly what the pro-life movement doesn't need. While I believe that changing hearts and minds on the abortion issue is of utmost importance, and I believe that we should keep focused on the abortion issue, we should not be obnoxious while we're trying to save unborn babies. That will only turn people off. Hence, my need to write this article.

AHA has created the following meme and has been passing it around Facebook: 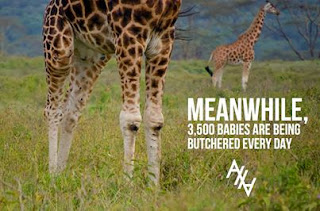 If you're unfamiliar with the giraffee riddle game, here's a brief description: Every week, a simple riddle is posted. You send a private message to the person posting the riddle, so as not to reveal the answer publicly. If you get the answer right, hooray! But I don't think there's a reward. If you get the answer wrong, you change your profile pic to a giraffe for three days.

Here's the first riddle that got the game jump-started: It's 3:00 AM, the doorbell rings and you wake up. Unexpected visitors. It's your parents and they are there for breakfast. You have strawberry jam, honey, wine, bread and cheese. What is the first thing you open?

Now, I think the game is silly. I haven't played it, and the "riddle" barely counts as a riddle, to me. A riddle is supposed to pose an intellectual challenge, it's not supposed to pull a bait and switch on you in order to trick you. This is a riddle:

What has roots as nobody sees
Is taller than trees
Up, up it goes,
And yet never grows?
(J.R.R. Tolkien, The Hobbit)

And this is a riddle:

The giraffe challenge? Not so much. But that's beside the point. It's harmless fun, so while I think it's silly, I don't see anything wrong with, nor am I going to ruin someone else's enjoyment of the game. But now it seems like AHA doesn't believe that we can ever have enjoyment on Facebook. We must always be dour and keep our minds always on unborn children or we're not doing our job. Again, we should not be obnoxious while spreading the pro-life message, and that includes not using tragedies like 9/11 to push our ideological agenda. On a day like today, I think it can be appropriate to compare the numbers on 9/11 to abortion numbers, but actually on 9/11 it's uncouth and just plain obnoxious to use the memory of the tragedy for our own political agenda. Even someone like me, who spends much of my day, every day, thinking about abortion and has dedicated my life to saving unborn human children, needs a break now and then. You get burned out if you don't take a break occasionally.

As my friend and fellow pro-life advocate Tim Brahm said, I wish some pro-lifers wouldn't abortion juke everything. And as another friend and pro-life advocate, Greg Peterson, indicated, things like this help us to understand the other side's frustration a little better. AHA seems to need a massive overhaul, not just of their personal philosophy and theology, but also over their image. Let's use this as an opportunity not to try to annoy people into taking a stand for the unborn or changing their minds on the issue, but as a lesson in how not to interact with people on the issue of abortion.
Posted by Clinton Wilcox at 8:00 AM

Looking for something specific?

Blogs You Should be Reading